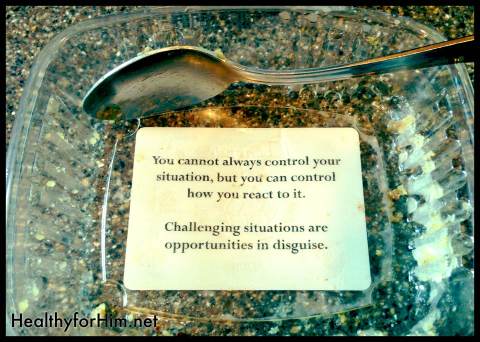 This was at the bottom of my daughter’s coconut cream pie treat the other day. Challenging situations are God’s BLESSINGS in disguise. Thank Him for those blessings.

It didn’t do my body good.  I bought the lie…  so I’m passing this on instead!

The recommended daily allowance from the USDA standard, is 3 cups a day of dairy.

I used to drink 3 – 12oz glasses of pasteurized skim milk a day…  all throughout growing up.  I remembering thinking families were strange of they didn’t have milk with a meal.  We always did.  It was my favorite part of the meal.

I drank loads of milk while pregnant too.  “Have to get my extra calcium you know!”

I could barely drink it while pregnant though, and with my second child – I got so sick from milk, it’s not a wonder why she too had issues with dairy from a very young age.  She was trying to let me know – “NO mom, it’s making me sick.”

When I got pregnant with my 6th child, and developed gestational diabetes – bells really started going off.  Maybe… just maybe – the conventional milk wasn’t all it was cracked up to be.

Each cup had 11 grams of sugar, and I was having 2+ cups a meal when possible.  (With diabetes comes carb counting – so that was almost 2 carb choices just my drink alone!)  Bad idea.  The milk had to go.  They encouraged me to drink 1 cup a day… that’s it.

(Why again does it have SUGAR in it, oh that’s right – so we’ll become addicted when we drink it?  I guess sugar isn’t enough, they’re trying to add aspartame!)

At the time,  I thought my life might end when they told me to cut down on the milk.  I knew I liked other carbs better than milk alone – so I figured I would rather have graham crackers, than milk.

{Oh my Sara.  Another great choice and why diabetes nutritionists teaching you to MANAGE your disease, vs. heal you from your condition = job security}

That was 7 years ago… I stopped drinking milk altogether 2 years ago.  I have an occasional cup of coconut milk in a plant protein smoothie I make, but we actually stopped giving our kids milk too.

I know, it seems drastic – but I honestly can’t believe I FED that to them… knowing what I do now, about the lack of health benefits from milk.  (How many mornings did they start out with MILK, and cereal?  ack!!  Talk about NO nourishment!)

One of the main reasons we made the switch was because of some testing I had done last year.  First a bone scan… praise God – my bones were great.  No problem there from the undiagnosed celiac, despite not drinking milk for the past 7 years.  Secondly a mineral test was done, and my calcium in my system was off the charts – great!!

Currently, all I have when it comes to ‘dairy’ is a daily coconut yogurt, and for added calcium – bone broth throughout the week.  I’ve never taken a specific calcium supplement.

So where does my family get calcium?

* Bone Broth ( I make this at least once a week, and the kids slurp it up, after making soup I have left overs to make with veggies and I have some frozen as well)

* Canned salmon (get a reputable brand that isn’t toxic!)

* Almond or Coconut yogurt and milk

Now in the defense of Raw milk movement with paleo,  (since I know lots of people tolerate it with no problems), we did try it for a time, and it continued to cause inflammation (within a day my son started wetting the bed and he and my daughter began coughing at night…  see how inflammation is systemic?)  They sure loved it – but for us, the casein isn’t tolerated.  This is often the case for many people, who have no clue that dairy is causing systemic inflammation.  That’s why people with auto immune disease are told not to consume gluten OR dairy.  Not a big deal to us – if we need “milk” – coconut milk is just fine.

Isn’t it funny when you learn things aren’t true that were impressed upon you as a child?  Always keep learning… don’t just take what is being told to you – even if the schools, or the government is saying it.  Search out the Truth, so that you can be Healthy for Him!