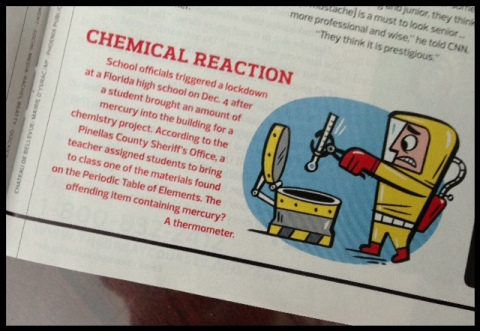 But to what extent are they harming our health…  and should we really consider them when our health is failing?

I recently watched a video from a health conference held last fall.  The conference had several experts, who talked about several toxins… metal toxins were just part of the equation.  I just had no idea the seriousness of the matter – and if you don’t either, or think this doesn’t apply to you.  LISTEN UP.

It was quite a reality check for me…  and the more I thought about it – I really felt sick.  Now granted, I’m not letting it consume me, as I’m still in God’s hands.  But I’m on track to do what I can to help get these metals OUT of my body – and be more considerate of my children as well.

Imagine this – the blurb above talks about the threat of mercury (cased in a thermometer mind you) – putting a school on LOCK DOWN… because they government knows of the dangers of this very serious metal causing very drastic destruction.  It’s extremely unhealthy.  In fact, studies show that the only toxin that recreated Alzheimer’s to occur in brain cells … was, in fact – mercury.

Well, the M.D. in the video I watched talked about how special precautions must be taken to remove a mercury filling from your mouth… how even breathing in the mercury can be very damaging, and how the government would come in an arrest the dentist if he just put that in the trash.  SPECIAL precautions must be taken to ensure it’s properly disposed of…  And yet… it’s supposedly “ok” to have those fillings in your mouth?

I have 8 of these fillings in my mouth.  One was redone about 3 years ago … but I never remember special precautions being taken.

So, toxic to be in the open air, but no longer toxic to be IN my head – right by my brain?

Here was another realization for me…

Does the word thimerosal ring a bell?  It’s a mercury-containing organic compound.  A “preservative” that is used in many drug products…  and again, the FDA states that it’s safe.

I remember the big hub-bub about it … as we’ve immunized our children for their shots “on-time”… and I remember when they removed it from most brands of immunizations – but I didn’t realize, they then put this in the flu vaccine.

I’d like to think that we didn’t have any adverse reactions from thimerosal…  But then – as the speaker was talking about the autism connection, and behavior spectrum disorders – I began to think of my two children, who clearly have behavior spectrum disorders.  I began considering my one daughter specifically – and her friend, who is very similar to her – in “odd” ways – that we’ve often joked they are sisters.

What do they have in common really…. besides birthdays??

Oh, only that it’s highly likely they received the SAME dose/batch of vaccines around the same times.  My son, just 13 months younger… again – different symptoms, but similar issues… also has a peer around the same age – with similar behavior spectrum struggles…  again – what did they have in common?  Vaccines.

You can see why I suddenly felt sick.

The idea that I had possibly “done” something in effort to keep my child well – made me ill.  Mainly because the struggles we still have today might have been prevented, if this “FDA approved” thimerosal wasn’t given to them.

The good news is – it’s not in most infant/toddler vaccines now.

The bad news?  It’s in most of the flu shots given today (not the flu-mist, it’s never been in that)… and as you’ve noticed – there has been an extra big push the last few years for getting the flu shot for everyone – ages 6 months and up…. even making it FREE, or a panic situation to get one!

Well, this is the first year we haven’t gotten it.  We have had one for the past 13 years… making sure we’re all covered of course.  The last 3 years – we still all got the flu…. which after discovering we had low IgA – made sense.  The shot was actually doing nothing helpful – it was actually MORE harmful to us.

If you want to check out what the FDA says about the “safety” of this mercury preservative… you can read about it.  I don’t write this to scare you – but I certainly was glad to know.  Trace amounts, or not – you’re putting it directly into your blood stream…

Why on earth would this be considered a good practice in the name of health – and exactly HOW do they measure effects on infants who can’t talk?  By the time most parents know what has happened – they’re told it’s genetics, or that they have “no idea” or “no way” to track what could have caused things.  I don’t know about you – but I don’t think that’s good enough.

I remember specifically when it seemed my daughter changed… and I never knew why my son was so angry – for realizing it was behavior spectrum issues.  Autism has been on the rise in the past 30 years.  Just one in 10,000 in 1970…  now 1 in 88.  Check the stats here.

Is that only because we’re better at diagnosing??

Don’t get me wrong, I’ve never been anti-vaccine, other than having some issues with my niece getting ITP from her MMR at age 1… and my son having a serious reaction from the H1n1 vaccine… My kids have gotten their shots – for the most part, on time.  I think it’s a different story – when it happens to YOUR child.  But if you’re in the minority, and your doctor tells you – it’s a non-issue, most likely – you’ll believe him/her.

“Our fathers disciplined us for a little while as they thought best; but God disciplines us for our good, that we may share in his holiness. No discipline seems pleasant at the time, but painful. Later on, however, it produces a harvest of righteousness and peace for those who have been trained by it.”
Hebrews 12:10-11

Posted in Label Reading, Our Struggles