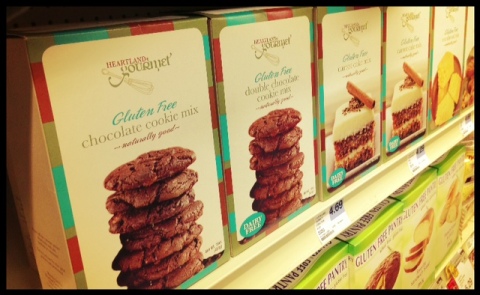 This new brand of GLUTEN-FREE baked good showed up at few weeks ago. We made the chocolate cookies and they were a hit! Everything they offered was GF and DF except the corn bread. Enjoy!

or maybe it’s something … or nothing.

Well… I mean… I know it’s SOMETHING, but will we find out what that ELSE that SOMETHING IS –  before this year ends???

As she began reading off the lack of information the latest batch of blood results showed, she got to my ANA test, and explained how my levels were elevated…

and how that can be something…

{You have to love these blood test results that seem to shape the future tests, and these steps that MAY or MAY NOT end up affecting everyday of the rest of our lives.}  Right?

Similar to celiac, these blood tests can be helpful – or worthless… and it’s certainly isn’t foolproof.

One false negative or positive, and lead you in a different direction – missing the problem altogether.  Fabulous.

We finished up the phone call, after she said we were waiting on a few other tests – that might point us towards lupus or sjorgrens…  I think what she thought would be a stressful call of letting me know carefully (as to not upset me), left me with hope that we might eventually have answers – and I am in NO WAY depressed from that.

Obviously I’ve already embraced that SOMETHING is clearly wrong…  and I just want to know what that is.

I’ve done well NOT to jump to conclusions, but only learn about the certain auto immune diseases (out of the 80 that exist) that matched my symptoms.  The Dr. has suggested what her suspicions reside with – I want to know a little bit about what this all could mean.  Naturally, we have curiosity – and I just want to be on a road that isn’t continuing to crumble.

First of all, values of an ANA test – aren’t really a quantitative answer in blood testing.  A higher number doesn’t indicate “worse” vs. a lower number meaning “better” or fewer symptoms.  Basically, it means more of a positive or negative… and a reason to dig deeper.  The nurse said – it doesn’t always mean auto immune disease… but it’s good indicator of.

What I read later was… if you had no other symptoms of lupus or sjorgrens or others, then a positive doesn’t mean much as far as having active auto immune disease.  However, if you’re having symptoms that line-up with the test – then the test means a bit more… {again, to point you into further testing.}

Personally, Sjogrens makes the most sense to me – as far as what goes with celiac, and what lines up my symptoms that revolve around my head/neck/eyes/lymph nodes – as well as fatigue, and breathing issues.  While I knew what it was in the back of my mind, I didn’t REALLY know much about it.

Then I watched this.

While I realize it could very well NOT be this either – because often times AI issues over lap with one another, and I realize they want to know what they’re dealing with exactly to best treat you, and monitor you…  and I appreciate that…

It’s just – there is something of comfort to listen to someone else who feels similarly and who “gets” it – and NOT feel so alone in your lack of energy, drive, motivation and capability.  If some top athlete can get struck down with this, and a year later – by God’s grace – revamp her life and health to be an Olympic champion and rock star the following year…

I can be well again, too.

Hope for answers, and health – and NOT feeling like cement, who doesn’t care… who hurts all the time… and who is always tired, chronically thirsty and over-all sick.

And you know I’ll do whatever in my power to get there.  By God’s grace, and will – I will be well again.  I look forward to that.

If you are struggling with getting answers on why you are sick, and suspect it might be auto immune related, here are some TIPS on how to get the help you need.

“What do workers gain from their toil?

I have seen the burden God has laid on the human race.

He has made everything beautiful in its time.

He has also set eternity in the human heart;

yet no one can fathom what God has done from beginning to end.

and to do good while they live.

That each of them may eat and drink,

and find satisfaction in all their toil—this is the gift of God.”