Can I Still Have My Coffee?

I think college is what sparked my interest in coffee.

As a child, I always enjoyed the smell of coffee…  but I couldn’t, for the LIFE of me, figure out why people drank it. 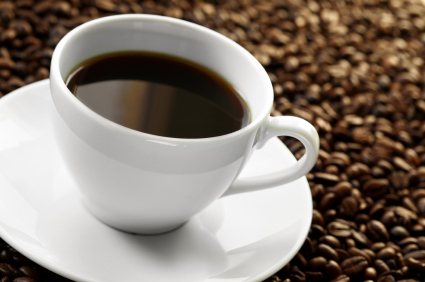 Coffee can actually be GOOD before a work out? Yes! (photo via The Fitness Chronicle)

Then came short nights, and long days… and before I knew it, coffee didn’t taste “so bad”.

It was a slow transition.  I think at first I started drinking some gas station version of a “latte”, which was pretty much a sugary warm drink with a HINT of coffee flavor.  It was like cocoa with a “kick” at that point in my life.  This humors me now, as I can’t stand “flavor” or any additions in my coffee.

I can drink a latte now and then.  Tall, Decaf, Skinny… but please – NO flavor!  For the sake of what we’re talking about – we’ll stick with plain, black coffee.

So the question is often asked… “What about my coffee, do I have to give it up to be healthy?”

Well, one thing is for sure, when it comes to health talk… opinions abound!

One article may something is “bad” for you, another may state clearly that same thing can be GOOD for you…  Even doctors vary on this topic!   Both ends of the arguments can be very convincing, and you’re just not sure what to believe!

It can be quite confusing, can’t it?

My husband’s uncle is a Dr. and he gave up coffee entirely for a while to see what would it would do as far as health benefits.  After several months of study, he shared with me what I had read:

Drinking 8 oz of coffee a day can be good for your mental clarity and health.  It can be recommended 30 minutes before a workout to boost your energy level and maximize your fat loss (Unless you’re trying to gain bulk, it doesn’t help with that – just muscle definition).  While other studies said drinking any type of caffeine will throw off your blood sugars by messing with your heart rate, metabolism and nervous system!  So… you have to realize and figure out what it does to you and the type you’re consuming.  Remember how we talked about God designing us all differently?  Basically, it affects different people differently, depending on your chemical make up.  Some reactions are going to be more drastic than others… and obviously things like flavored coffees can make the calories add up QUICKLY.  Try to stick with a black coffee, and something from a whole foods store is best.

I can enjoy a cup now and then, and I’m ok with it.  If it’s a vice to you (if you drink coffee after coffee all day long), than maybe you should consider getting rid of it.  It’s definitely worth talking to God about, and praying about it.  Pop used to be for me, how coffee is for some people… I thought I needed it to function after having 4 children.  This is when something can become a stumbling block or even an idol.  Consuming regular pop was a “helper” (*if you can call it that) in my whole gestational diabetes venture.  Nine teaspoons of sugar in my “drink” was running my system a muck!

I switched to diet pop after child #6…   I told myself I couldn’t “give it up”… So of course, I believed that lie.

Do some reading on diet pop, and it will become way less appealing quickly… at the very least, you’ll begin considering if those “good” feelings out weigh the bad.

Once I decided I was going to take a break from pop and cut it back to one, once a week… I realized many weeks I didn’t even want the “one” I gave myself permission to have.  It lost it’s luster, and I lost the desire to “have to have” it.  Although I never experienced things like weight gain from it, I knew that it wasn’t God’s best for me to drink it in the amounts I had come to embrace daily.  I’ve actually stopped drinking it for 6-9 months only to return to it when my babies were little.  It’s much easier to give things up when you’re getting proper REST.

The more you wean yourself off of caffeine, the easier it is to live without it.  That “high” you get from it … is also followed by a LOW.  It’s actually much lower than when you started feeling “tired” to begin with…. so often people then drink MORE caffeine for more of an energy high or to suppress their appetite.  Hmm… almost sounds like a drug??  Only it’s legal.

Just some drink for thought.  The Bible isn’t always specific about things like coffee or caffeine consumption… and obviously drinks can be mis-used as a meal replacement (instead of eating), an energy replacement (instead of sleep)… and that’s a no-brainer.  Those aren’t the best choices for our bodies, or being healthy for Him.

“For physical training is of some value, but godliness has value for all things, holding promise for both the present life and the life to come.” – 1 Timothy 4:8

Posted on August 10, 2011, in Change, Our Struggles, Truth and tagged coffee good for you?, Danna Demetre, drinking water, healthy for God, healthy for him, losing weight, reasons to be healthy, skipping breakfast, type II diabetes, worship in body. Bookmark the permalink. 1 Comment.